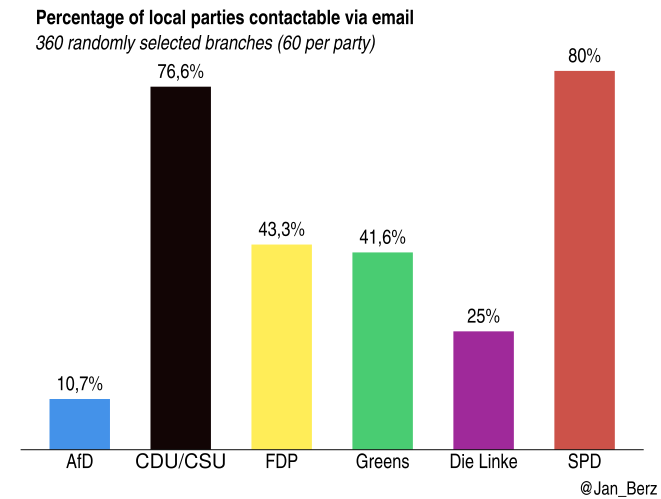 How Established are Local Branches of German Parties?

I recently collected email addresses of German parties for an experiment. I randomly drew 360 times out of a list of all 2060 German cities to get 60 addresses for each party in the Bundestag. Addresses from local branches were my preferred target, if an address wasn’t available because a branch did not exist or did not provide an email address I switched to the county level in which the city was located (I also checked county websites for addresses of local branches). In the end I had to switch more often than I expected.
Since by 2018 email addresses are an old way of communication the percentage of email addresses should provide a decent measure for how established a party is on the local level. Even if a local branch doesn’t maintain a website, at least the county branch should commonly provide an address to contact a local party branch.
For the 360 randomly chosen local branches I could only find 166 email addresses (46,1%). However, the differences between the parties were significant. The local branches of the CDU/CSU and the SPD nearly always existed and provided an address. Branches of the Greens and the FDP existed and gave an address a little less than half of the time. When collecting for Die Linke and the AfD I frequently had to switch to addresses on the county level.

Note that since the confidence intervals are large (20% points), differences between FDP, Greens/Die Linke and between the AfD/Die Linke are not significant on the 5% level.

The low coverage among the AfD isn’t surprising for a party that only exists since five years. Nevertheless if we compare the coverage of FDP (founded in 1948) with the Greens it’s clear that party age can’t really explain coverage. The coverages rather seems to increase in relation with the number of party members. Which is plausible since it is easier to establish branches on the local level with many members. By this measure Die Linke is a strong outlier; although the small sample size does not allow a certain conclusion. The party has slightly more members than the FDP, but by this measure would be far less established on the local level.

The availability of local addresses furthermore increases with the size of the respective city. Most likely because it becomes easier to set up a website the more fellow party members are around (or because internet connections are slightly less abysmal). Taking the natural logarithm of the population and the population per square kilometre the plot below shows in which cities I found local email addresses. In the smallest cities addresses are basically never available. This improves with the size of the city, although addresses may still not be available for local branches of the AfD or Die Linke.

I will probably revisit this topic at a later point in time to see how the AfD develops.